Based on latest available statistics, ITP projects a volume of 3.2 million tons of recycle polyethylene traded globally in 2018. This is a decline of 31%, or 1.4 million tons, from 2017. Exports out of Western Europe and North America were particularly impacted, although shipments from all regions were down.

The decline in global trade volume was due to China, which imported virtually no RPE in 2018, versus 1.94 million tons in 2017. 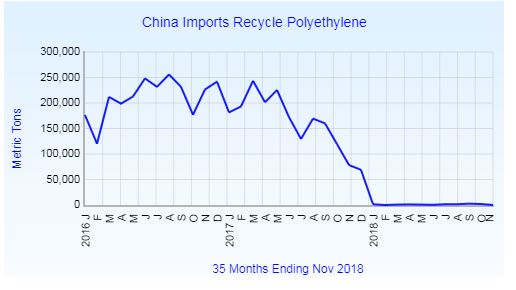 The loss of the Chinese market for RPE of 1.94 million tons was partly offset by higher imports into other Asia-Pacific markets, mainly Malaysia, Vietnam and Thailand. As a result, imports into the Asia-Pacific region in 2018 were down 46%, to 1.1 million tons, a reduction of 930,000 tons from 2017.