The upward trend in US exports of LNG since January 2016 is visible below: 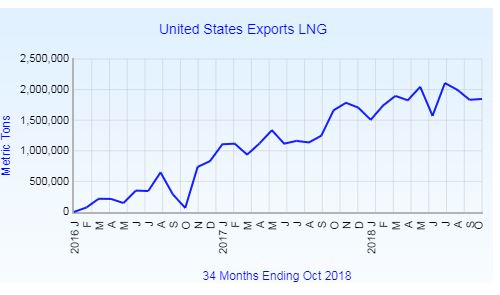 The US shipped no LNG to China in September because of the trade war, but exports resumed in October despite a 10% duty. Exports to China October YTD totaled 2.1 million tons, up 57%.

Despite huge LNG capacity the US continues to import LNG because of pipeline and other constraints. Nearly all of this was from Trinidad and Tobago in 2018, with small volumes from EU countries. In 2017 small volumes were imported from Russia and Nigeria. To date, US imports of 2 million tons were down 10%; in 2017, imports were down 14% from the prior year.