The volume of propylene monomer traded as imports and exports in 2016 was 7.8 million tons, down 2% from 2015. (Based on latest available trade statistics.)

Lower imports into both Asia-Pacific and Western Europe from sources outside each region, and also lower intra-regional trade in Western Europe, negatively affected global volume.

Trade within Western Europe was down 11%; imports into the region from North America, Middle East and Latin America fell sharply. 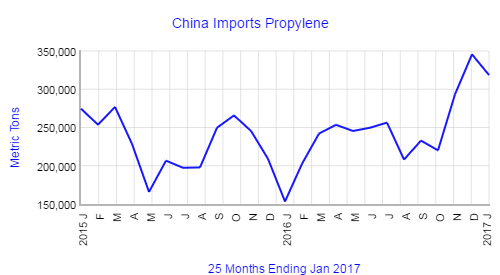 North America’s exports to Latin America jumped by 80%, to 400,000 tons, on US shipments to Colombia and Mexico.