After trending downward for most of 2016 and into early 2017 China’s imports of liquefied butane gases soared to a new record high of 557,000 ton in May and continued to rise in June, reaching 587,000 tons.  Average prices slipped in both months, to $433/ton in June.

Two months of record high volumes resulted in an 11% increase, to 2.3 million tons, in China’s imports of butanes in the first half of 2017 versus the same period in 2016.

Although statistics from China list United Arab Emirates as the country’s top supplier of butanes and the source for 1.0 million tons of its YTD total, most of this is believed to originate in Iran. Other leading suppliers to China include Kuwait, Qatar, Saudi Arabia, Australia and Nigeria. Recently, there have been large percentage increases on smaller volume imports into China from Angola, Malaysia and the United States.

The sudden reversal in the trend in China’s imports of butanes is evident below: 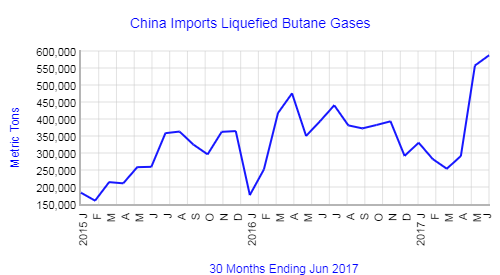